Weekly Reading Round Up

When I don’t want to adult anymore my go to reading is always young adult novels. They make me smile. Lucy McConnell is a favorite of ours, so when she comes out with an young adult novel on a week I’m really done adulting, it’s a time to rejoice. This was just what I needed. It was a quick, cute, fun read.  Adelle was an adorable character that you love right away. Such a great start to a new series.

Road Trip with the Enemy by Kelsie Stelting

A little ironic that two of us picked young adult books this week that dealt with grief and death. Especially when that seems to be something so many are dealing with currently. The author handled it really well, such good emotion.  There were a few things that Sydney’s character did that I wouldn’t want my teenager to think was an okay way of grieving, but the author did a really good job of showing how people cope and grieve differently and the ramifications of that.

I have been waiting rather impatiently for the next steampunk fairy tale. These books are so unique. They balance romance, suspense, fantasy and fairy tale components so well. This one however, wasn’t my favorite. The plot was intriguing and the suspense kept me engaged, but there were a few elements I’d come to expect from the others that felt missing in this one. I found myself often distracted from an otherwise interesting plot because I was trying to figure out the Cinderella aspects. In the other books in this series, the fairy tale connection felt natural and ingenious, this one felt a little forced. I really like the two sides of the same coin concept in the enemies to lovers trope. There were definitely swoon worthy moments between Emme and Oliver and I loved their snarkiness.  I may need to go back and read the last book to see if there’s a little more back story between the two characters that I just don’t remember, because the romance felt a little rushed. Despite not being my favorite, you can bet I’ll be waiting just as impatiently for the next steampunk fairy tale. I love this unique and wonderful world the author has created.

The Kiss That Launched 1,000 GIFS by Sheralyn Pratt

Not only is this book light and fun, and witty. The perfect romantic comedy. It also has moments of honesty about relationships that make me want to say, hey everyone, read this! I really love her writing so much!

The Ghost of You and Me by Kelly Oram

Confession: I often fall into the human failing of putting people into boxes, not very good I know, but we all do it. If you think about it we do it to books too. This book is historical fiction, this book is fantasy, this book is contemporary romance. The best books and the best writers, are those that don’t fit into a specific category or break the mold in a given category. Let me introduce you to Sheralyn Pratt.

I had already read a couple of her romances when Pimpernel came out, so I picked it up and loved it! The characters were beautifully well developed and flawed but still realistic. And then out of no where she throws a curve ball. I literally had to read the whole book over again, up to that point, because of the paradigm shift she presents to her readers; it was genius! And I loved the book all the more for not only surprising me, but creating a plot that challenged me and had all the feels. So, when I got the email that Pimpernel: Royal Ball was coming out, I knew it was a must read. 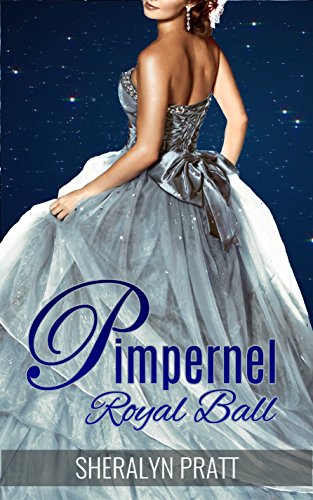 I got it the first day it was available and Sheralynn Pratt shifted my paradigm again. This time in a big way, she was bustin’ out of all sorts of boxes.

First of all the book description gives nothing away. “One man, one night, one dance, and one question…none of which Claire Ramsey sees coming. She thinks the night is a test—a call to rise above her insecurities and step more fully into her skills. It’s been a year since she learned about the Pimpernel and fell in love with the man of so many masks. Jack’s world is full of high stakes and big players, and Claire wants in. To her frustration, Jack is dragging his feet on letting her all the way into both his heart and his work. The risk is too high, he says. But Claire is ready to prove him wrong. She’s ready to go all-in.
What Claire doesn’t know is that Jack is no lone wolf, and the world he is shielding her from is much bigger than she has ever imagined. But one man, one night, one dance, and one question will change everything.” Sounds like Pimpernel part 2… it’s not. It is so much better.

I have to confess I had a hard time shifting with her this time. In “Pimpernel” the story was enhanced by seeing both Jack and Claire’s point of view. They’re such opposing personalities the story was given more depth and nuances from seeing it through both lenses. In “Pimpernell: Royal Ball” we get both points of view again, but we also see things through Kali’s eyes. At first I felt like Kali’s chapters were a distraction, they didn’t seem to flow with the plot and it took effort to try and fit her in.

Then we meet Malachi who is described as a secretive genius with his own agenda and schedule which no one seems to understand until months afterwards. As I continued to read I realized, Sheralyn Pratt is her own kind of Malachi. Lightbulbs started going on all over the place, the biggest being Kali. Kali is the resident skeptic and through Kali’s suspicion and distrust it allows us to question the new direction of characters we thought we knew. The more Kali is drawn into this new world the more we are too until you realize that, through Kali, Sheralyn Pratt has shifted you out of the box you’d put her stories into, into something much cooler. The characters you’ve come to know and love have amazing possibilities and millions of story line directions and you’re on the edge of your seat waiting to see what happens next. So, Sheralyn, you better not make us wait too long, I’m just saying. –N.C.

Sequel to the award-winning novel, Pimpernel

One man, one night, one dance, and one question…none of which Claire Ramsey sees coming.

She thinks the night is a test—a call to rise above her insecurities and step more fully into her skills. It’s been a year since she learned about the Pimpernel and fell in love with the man of so many masks. Jack’s world is full of high stakes and big players, and Claire wants in.

To her frustration, Jack is dragging his feet on letting her all the way into both his heart and his work. The risk is too high, he says. But Claire is ready to prove him wrong. She’s ready to go all-in.

What Claire doesn’t know is that Jack is no lone wolf, and the world he is shielding her from is much bigger than she has ever imagined.

But one man, one night, one dance, and one question will change all of that in a way Claire never saw coming.

For centuries, the elite of the world have sought the Pimpernel everywhere. Some want to kill him, others want to hire him, but Jack Cavanaugh knows that the love/hate relationship comes with the job title.

At present, Jack is trying to dismantle an investment scheme centered in Las Vegas, but “trying” is the operative word. It’s been a month since he put the face of the scheme behind bars, yet the scam is still going strong. As Jack tries to uncover who has stepped in as the new head, what miniscule evidence there is all seems to point him back to Claire Ramsey, an introverted PhD student studying at UNLV.

If ever there as an unlikely head of an investment scheme, Claire’s it. She has a genius IQ, but from all Jack has seen, Claire’s intelligence is as much a blessing as a curse when paired up with her acute OCD. Claire can barely make conversation with the cute guy down the hall, which makes it hard to believe she could be the charismatic salesperson who is getting international businessmen to invest $5—50 million a pop.

So what is Jack missing? What is the real story behind Claire Ramsey? And once Jack learns it, will he be able to walk away?

***This was a fascinating book! Yes that exclamation point was called for. I’m not often surprised, and even when I am it’s not usually shocking. I loved the twists and turns in this mystery and appreciated the tender side that was balanced so well with the action. The story was clever, the writing was engaging and the characters endearing.  –N.C.

Sheralyn was born at an early age, with 10 fingers and 10 toes. She is proud to report that she currently retains all 20 digits. Described by one reviewer as “the bomb dot com” (url already claimed… bummer), Sheralyn has been a karate instructor, musical theater performer, a beach bum, freelance writer, nomadic traveler, and, yes, a private investigator. At the moment she enjoys working with and training her dog to give the poor thing breaks from sitting and Sheralyn’s feet with the unbearable task of watching someone write a book.

Really, and you thought your job was bad!

Sheralyn currently resides in Salt Lake City, Utah, although as people who know her can attest to, that is subject to change at any time 😉

Open only to those who can legally enter, receive and use an Amazon.com Gift Code or Paypal Cash. Winning Entry will be verified prior to prize being awarded. No purchase necessary. You must be 18 or older to enter or have your parent enter for you. The winner will be chosen by rafflecopter and announced here as well as emailed and will have 48 hours to respond or a new winner will be chosen. This giveaway is in no way associated with Facebook, Twitter, Rafflecopter or any other entity unless otherwise specified. The number of eligible entries received determines the odds of winning. Giveaway was organized by Kathy from I Am A Reader and sponsored by the author. VOID WHERE PROHIBITED BY LAW.