It’s hard to teach children the difference between a good secret and a bad secret. For instance, it’s not okay to tell daddy what mommy got him for Christmas, but there are other secrets that need to be told. We’ve tried to teach our kids that surprises, like presents are good to keep secret, but if the secret could hurt someone physically or emotionally, then it needs to be told. Lets hope over the next week and a half you have a lot of surprises and very few secrets.

“A stolen Christmas kiss leaves them bewildered and breathless.

A charming rogue-turned-vicar, Will wants to prove that he left his rakish days behind him, but an accidental kiss changes all his plans. His secret could bring them together…or divide them forever.

Holly has two Christmas wishes this year; finally earn her mother’s approval by gaining the notice of a handsome earl, and learn the identity of the stranger who gave her a heart-shattering kiss…even if that stranger is the resident Christmas ghost.”

Donna Hatch is an expert at swoon worthy moments. This book is no exception. The story is so fun and her enchanting characters make it come to life.

Donna Hatch is the award-winning author of the best-selling “Rogue Hearts Series” and is published in sweet Regency romance and fantasy. Her professional memberships include Romance Writers of America (RWA)and American Night Writers Association (ANWA). A sought-after workshop presenter, she juggles freelance editing, multiple volunteer positions, not to mention her six children (seven, counting her husband), and still manages to make time to write. A native of Arizona who recently relocated to the Pacific Northwest, she and her husband of over twenty years are living proof that there really is a happily ever after.

You can find our review of “The Guise of a Gentleman” here.

Open only to those who can legally enter, receive and use an Amazon.com Gift Code or Paypal Cash. Winning Entry will be verified prior to prize being awarded. No purchase necessary. You must be 18 or older to enter or have your parent enter for you. The winner will be chosen by Rafflecopter and announced here as well as emailed and will have 48 hours to respond or a new winner may be chosen. This giveaway is in no way associated with Facebook, Twitter, Amazon, BookBub, Instagram, Rafflecopter or any other entity unless otherwise specified. The number of eligible entries received determines the odds of winning. This giveaway was organized by Kathy from I Am A Reader & Clean Wholesome Romance and is sponsored by the author. VOID WHERE PROHIBITED BY LAW.

I’ve read every one of Donna Hatch‘s books and loved them all, “The Guise of a Gentleman” was one of my favorite. Perhaps it has to do with the pirates, who doesn’t love a good pirate story? Donna Hatch combines both wit and adventure to create a compelling and enchanting novel every time.

“The widowed Elise is a perfect English lady living within the confines of society for the sake of her impressionable young son. Her quiet world is shattered when she meets the impulsive and scandalous Jared Amesbury. His roguish charm awakens her yearning for adventure. But his irrepressible grin and sea-green eyes hide a secret.

A gentleman by day, a pirate by night, Jared must complete one last assignment from the Secret Service before he can be truly free. Elise gives him hope that he, too, can find love and belonging. His hopes are crushed when his best laid plans go awry and Elise is dragged into his world of violence and deceit. She may not survive the revelation of Jared’s past…or still love him when the truth is revealed.”

I also just recently re-read “Unmasking the Duke”. I read it for the first time in the Timeless Regency Collection, “Autumn Masquerade” it was just as good the second time around. Her female characters are always unique and strong and her male characters are swoon worthy, but atypical, making for interesting pairings and delightful encounters.

Best-selling author of Regency Historical Romances, Donna Hatch is a hopeful romantic and adventurer at heart. Donna sings and plays the harp, and loves to ballroom dance. Her family, including six children, recently left their native Arizona for the west coast of the US. No matter where they live, she and her husband of over twenty years are living proof that there truly is a happily ever after.

Open only to those who can legally enter, receive and use money sent via Paypal or gift codes via Amazon.com. Winning Entry will be verified prior to prize being awarded. No purchase necessary. You must be 18 or older to enter or have your parent enter for you. The winner will be chosen by rafflecopter and announced here as well as emailed and will have 48 hours to respond or a new winner will be chosen. This giveaway is in no way associated with Facebook, Twitter, Rafflecopter or any other entity unless otherwise specified. The number of eligible entries received determines the odds of winning. This giveaway was organized by Kathy from I Am A Reader and sponsored by the author. VOID WHERE PROHIBITED BY LAW.

I’ve been counting down the days until this week for the past month, school is back in session! Perfect time for a new release. 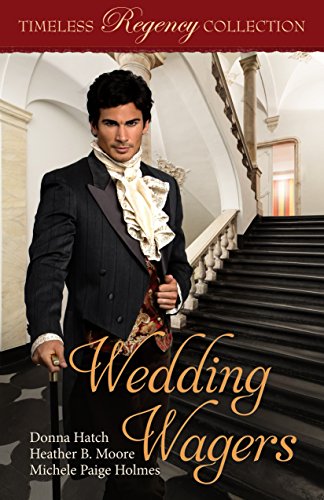 The Timeless Anthologies always bring together a group of fantastic authors and this time was no exception. Wedding Wagers has stories by Donna Hatch, Heather B. Moore and Michele Paige Holmes. They are all authors that I have enjoyed in the past, and I loved what they did in the collection.

A WAGER FOR LOVE by Donna Hatch:
For once, Phillip would like to be seen as more than the younger brother of a duke. When he unexpectedly meets the one girl in all London who doesn’t give two figs for his rank in society, she won’t give him the time of day. Determined to gain her attention, he accidentally tips over her boat and dumps her into a river. Not the best way to convince a lady of worth that he is a gentleman of promise. Frustrated, Phillip makes a rash wager with a friend: he vows he’ll not only gain her forgiveness, but her hand in marriage by the end of the Season. The stakes are high in this romantic Regency romp!

THE FINAL WAGER by Heather B. Moore:
When Victor Roland, Earl of Locken, enters into a game of twenty-one with Lord Southill, the stakes get quickly out of control. Before Victor knows it, Southill is betting the dowry of his sister. While completely illegal, Victor is mostly insulted, so he does what any gentleman of the ton should do. He punches Southill out. Problem is, Southill is in so much debt that he’d been kicked out of his townhouse earlier that day. So Victor is forced to deliver Southill at his estate outside of London . . . only to meet Southill’s sister, Lady Juliet, a woman who Victor now wishes he’d bet on.

AN IMPROBABLE WAGER by Michele Paige Holmes:
Sherborne Alexander Rowley III has come home to marry his neighbor—and solve his financial problems in one fell swoop. Love doesn’t figure into the equation, only the need to save his family’s estate. The reserved Miss Emily Montgomery seems willing enough, leaving the only possible obstacle to Sherborne’s success his childhood friend, Eli Linfield, and the wager they made long ago that Eli would be the one to marry Emily. When the timely birth of a colt, Emily’s mischievous sister Sophia, and Emily herself all conspire to ruin Sherborne’s plans, one night of mayhem unravels far more than their betrothal. Emily is not as demure as he believed, nor is Eli what he has pretended these many years. Yet the future for all may yet be bright. Sherborne might even wager on it.

This was such a fun topic. The wagers were respectable without being ridiculous and all three relationships were well developed, which can be difficult in a novella.

The chemistry of the lovers and the excitement of the wages made all three stories engaging and highly entertaining, I love it when great authors collaborate together to yield something I will read over again.  –N.C.