We are currently in the process of selling our house! We’re excited about this new chapter in our lives, but don’t necessarily relish the work that we have to wade through to get there. I’ve been elbow deep in mudding, painting and packing, making it really easy to pop in my head phones and get lost in a book. It doesn’t lend a lot of time for sitting at my computer. However, I’ve recently read three books I just had to take a quick break from house craziness to share with you. One is the first published work of a new author. The other two are old favorites, but new series’.

Technically K.M. Shea’s is a new series, The Fairy Tale Enchantress, but it ties into her Timeless Fairy Tales books telling the story of Angelique, finally! 🙂 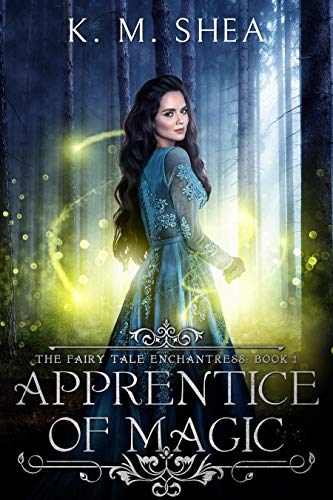 Angelique hates her magic. Her war-like ability to control any weapon has earned her nothing but the fear and scorn of fellow students and instructors.

Until Enchanter Evariste appears. The mysterious prodigy takes Angelique as his apprentice and shows her more kindness than she ever hoped to receive.

But things are changing in the world. Dark things. Evil things.
Once upon a time is about to become very real…

I loved the background she created for Angelique. Her emotions and her motivations were written so well I felt them with every turn of the page. I especially love how she handled the interactions between Angeliqe and Evariste, she set up the story so well I’m on the edge of my seat waiting for book two which doesn’t come out until April 12th!

Melanie Cellier is one of my top five favorite young adult authors and she recently started a completely new series. The Spoken Mage Series. Voice of Power and Voice of Command are both out now. Voice of Dominion come out April 20th.

For those of you who liked some of the concepts of Red Queen but like me, were turned off by the violence or the love triangle, you will love this series! It has heart and adventure and back and forth politics, in a good way. All with the fantastic writing that I always find in Melanie Cellier’s books.

Now, onto a brand new author. A Beautiful Love: A Regency Fairy Tale Retelling is the first published work of Megan Walker, it comes out on Wednesday, and I’m giving you the heads up now, this in an author you want to keep tabs on.

Preston Blake had it all—wealth, a picturesque estate, and a growing affection with his childhood best friend Caroline Avery—until an unfortunate accident leaves him badly scarred in more ways than one. Isolated by the cruel eyes of society, Preston’s only wish is to find where he now belongs.

Caroline Avery is recently out in society, and thanks to Preston Blake’s broken promises, finds herself being chased by a determined earl instead of courted by her best friend. When, after a year’s absence, Preston finally accepts an invitation to visit her family’s estate, Caroline is determined to feign indifference to his company.

But being back together proves more challenging than either friend conceived. Caroline longs to return to the past, but Preston cannot let go of his fears. How could they possibly have a future together?

Megan Walker took the tale of The Ugly Duckling that’s not often retold, and brought it to life. Her conversations are witty and engaging. Her characters had both hope and depth. She wrote with such emotion that I found myself siding with both Preston and Caroline. When she pulled in inner battles to the stories struggle it made the tale that much more beautiful. I’m definitely a fan.

I shouldn’t have been surprised considering the company she keeps. This story is part of the Forever After Retellings Series which already includes stories from Sally Britton whose writing I’ve adored for almost a year since her first release last May. (Harry’s book comes out next week and I’m am so excited!) Joanna Barker who is a new favorite, her second book comes out April 1st! Heidi Kimball whose writing I became acquainted with through the Regency House Party, and whose novel A Guarded Heart is currently sitting on my kindle waiting for the next round of painting to begin. Her contribution is the last in this series and releases in April. (Man my tbr list is going to be full of goodness).

These ladies including an author who made her debut with this series, Arlem Hawks, make up the Love Letter Press and will continue to be a beautiful force in the writing community.