I have to confess my favorite point of view for a novel is multiple third person. Especially with a romance. I love how it lets the reader watch the budding relationship expand between both the hero and heroine. I love getting into not just the heroine’s thoughts but the hero’s as well. Cause lets be honest, I’ve known my husband for almost 20 years and we’re pretty synced, but there’s a good forty percent of the time that I have no idea what he’s thinking. I love being able to say, oh that’s what the other person was thinking!

Keena Richins did a modern retelling of “Persuasion”, but instead of having the hero and heroine’s point of view in the same book, she wrote two separate books. One from Anne’s point of view and then one from Rick’s (our modern day Captain Wentworth). I was a little worried that I would be bored and feel like I was just reading the same novel twice, but there were enough moments of them apart that they felt like two different novels. 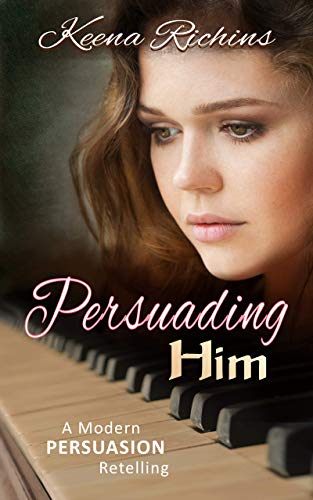 At seventeen, Anne found the love of her life in an ambitious, yet troubled ex-foster boy, but her wealthy family persuaded her to keep on her path to a prestigious career instead of running away with a boy with no future. Eight years later, she finds herself with no career, little money, and a heart still pining for that ex-foster boy. When she accidentally runs into him–now handsome, rich, and working for the prestigious Pemberley Estates Corporation–she discovers he still hasn’t forgiven her yet. How in the world is she going to convince him to give her a second chance? 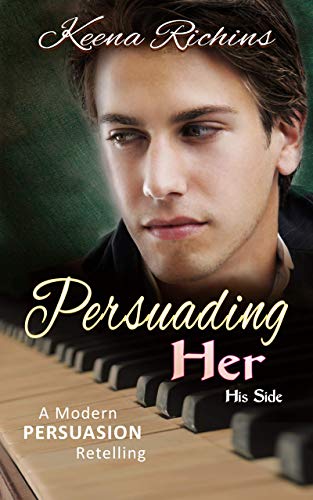 At nineteen, Rick Wentworth found the love of his life. Or so he thought. Dumped because he wasn’t good enough for her high-and-mighty family, Rick left, swearing he’d never return. Eight years later, he’s an Acquisition Manager for the prestigious Pemberley Estates Corporation, traveling the world and loving his life. Then he accidentally runs into his old love and feelings he thought were long gone come rushing back. But he’s determined to resist. She dumped him once; he won’t let her the chance to do it again, no matter how badly his heart wants to be hers.

“Persuading Her” is a stand-alone, clean/sweet, second-chance romance with a guaranteed happily ever after, plus with some other Austen characters sprinkled in. It tells the tale completely from Rick’s side.

Jane Austen’s books are timeless for many reasons, one of them being her characters. Anne’s character is complex because she’s strong yet shy, a peacemaker yet can be passionate. Keena Richins did a fabulous job writing Anne. You felt her feelings of inadequacies, her shyness and her strength through out the novel.

In ‘His Side’ the author used a life in foster care as Rick’s catalyst for a lot of his actions and it worked really well. I really loved her cookie metaphor scene, but she seemed to over use the phrase “that old anger resurfaced”, could’ve been more meaningful expressed in other ways.

There were more editing errors than I like to see in published novels but not enough to be too distracting from the story. The author kept me interested through out both books while pulling off a modern setting and weaving in other characters, gearing you up for more Austen from her in the future.