Grief is a tricky thing. Everyone copes and responds to it differently. Most people have experienced it, yet none of us really know how to respond to it. My husband’s brother died in a car accident as a teenager and the ripple affect of that painful experience are much smaller 20 years later, but still there. In Annette K. Larsen’s novella “All Our Broken Pieces”, she addresses some of the more intense complexities of grief with discernment and tenderness. 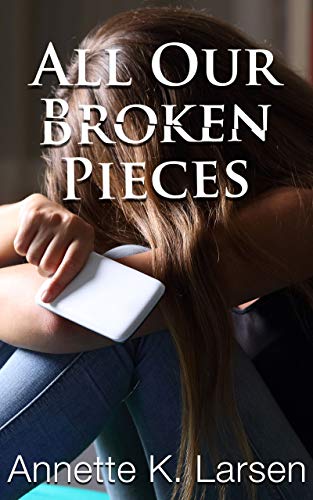 “Ginny and Devin have been best friends for most of their lives. They’ve relied on each other, laughed with each other, kept each other sane.
But now Devin is dead, and Ginny is floundering to find a way to cope with the loss and continue living when the one person she’s always relied on is gone. So she does what she’s always done. She pours her frustrations into texts to Devin, or at least to Devin’s useless phone number. She sends her pain and anger out into the void of cellular data with no hope of response.
Until the day when someone does respond. Ginny knows that this person—this Not-Devin—won’t ever replace her best friend, but maybe he can help her heal, or at least give her a reason to smile again.”

The first person narrative made the grief seem raw and personal. Annette Larsen’s characters are always genuine and well developed. Her portrayal of Ginny was unapologetic in her irrational responses making her feel authentic.

What she did with Alex’s character was just as impressive to me. He “didn’t have rock-hard muscles”, and he got “a little winded” carrying her, but he was empathetic and steady; the best kind of prince charming.

The way she wrote the romance, showcasing the differing connection between her friendship with Devin and her chemistry and connection with Alex, created a love story that felt more real, and more magical because of their flaws and experiences.

I was so invested in the characters and the plot that I wasn’t prepared when I swiped the page and saw, “the end”. I wanted more Ginny and Alex, yet I also loved where she left the story, with so much hope, potential and honesty.