What girl doesn’t wish she had a fairy Godmother? When I was little I would’ve asked for a pretty dress or new shoes. When I got older it would’ve been a date to Homecoming or a new car. Now I’d just want someone to clean my house and potty train my kids. Fairy Godmother’s are a classic plot device that continue to have merit. They’re even more fun when you set them out of context like Kimberly King did in her young adult contemporary story, The Trouble with Fairy Godmothers. 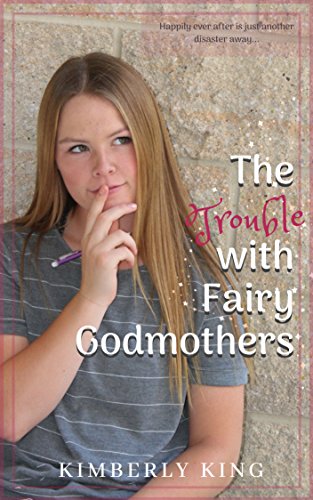 “All Nikki Baker wants is her fist kiss. All her fairy godmother wants is to get the job done as quickly as possible. Hilarious adventures follow when Nikki discovers her fairy godmother’s magic isn’t quite up to par…along with her taste in boys. Nobody is safe as spells bounce around from the school’s biggest nerd to the biggest jerk in ninth grade, and everyone else in between.

As love triangles grow ridiculously complicated, Nikki soon discovers that being a boy magnet has its downside. One best friend starts hating her, and another stops at nothing to prevent Nikki from getting her happily ever after. Is love really worth the cost of friendship? Nikki must decide for herself, but that means betraying either her best friends…or her impatient fairy godmother.”

I kept having to remind myself that these were High Schoolers, at times they seemed a little too shallow and caddy to be redeemable, but I loved that she showed that often as young adults (and even as adults), we don’t know each other’s situations. We far too often jump to conclusions and assumptions if we don’t take the time to understand where the other person is coming from. This was a beautiful message and made the story entirely relevant.

The one plot point that I had a hard time with was the boys. I’ve never been the quintessential boy crazy girl, so maybe that makes a difference, but Nikki’s feelings seemed to flit all over when it came to the boys in the story. Putting her with Ryker made sense with the underlying plot of appearances can be deceiving. However it seemed inconsistent with the simultaneous build up of the friends to more relationship with Shawn.

I appreciated the underlying truth she came to that she didn’t need a guy to make her happy, and she was her own type of beautiful. There were some great teachings that can hit home for many young adults.