Sariah Wilson is an expert at chemistry. And while the chemistry is well done and definitely spicy, it is a little on pg-13 side. I like my chemistry used as an inconspicuous thread subtly enhancing the story. In both #Starstruck and #Moonstruck the chemistry is more of a front row focus in the narrative than an indirect subplot. And yet it works, and I’ll tell you why. 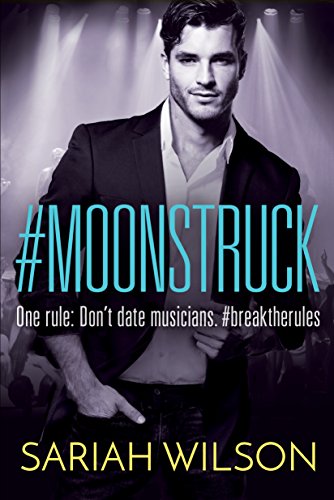 “After pop star Ryan De Luna praises Maisy Harrison’s YouTube cover of his classic hit, he offers Maisy and her fledgling band the opportunity of a lifetime: to be his opening act.

Music may be Maisy’s life, but she has one ground rule: never date a musician. That goes double for a heartbreaker like Ryan. If only she didn’t feel so vulnerable to his larger-than-life charm. And maybe now more than ever, when he asks for her help to shake off his playboy image. How can she resist playing the part of his fake girlfriend for the duration of the tour?

Ryan’s never met anyone like Maisy. She sees past all the star-studded fame and treats him like any other guy. And the more time they spend together, the more he finds himself falling for her. Now he’d like to make their imaginary fling an IRL thing. But can he convince her to take a chance and trust him with her heart?”

The story is sweet with hints of a rags to riches idea. Sariah Wilson gave the character’s enough back story to help you empathize with their decisions and be invested in their future.

The thing that makes me appreciate her story telling is her creation of a beautifully moral character that balances the intense chemistry. This line in particular was something every single person needs to hear and do, “I loved myself and the decisions I’d made about how far I would take things physically.” Nestled up quite nicely next to the heat is the idea that it’s ok to have boundaries, to curb the heat and exercise self control. I love that she does that in these novels.

I appreciated not only the balance between chemistry and control, but the balance in Maisy’s character between strength and vulnerability. Both Maisy and Ryan were beautifully flawed characters, that became even more through out the progress of the novel. I will applaud any book that can simultaneously entertain me, move me and defend the beauty of virtue. –N.C.