When I was a little girl my dad had season tickets to the football games of the local college. I loved it when it was my turn to go to the games, not just because I got quality time with one of my favorite people, but because I grew to love football! When I went to the same college years later, I made sure I took advantage of students discounts and got my own season tickets. I confess it’s one of the reasons fall is my favorite season. Probably also why I’m loving the influx of football romances lately.

Lindzee Armstrong just released a new novel in her “No Match For Love Series”  called Match Me If You Can. 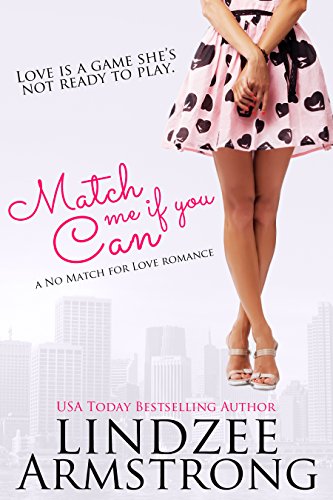 “Football lineman Wyatt James is convinced relationships aren’t worth the trouble. The last time he fell in love, his girlfriend secretly dated the quarterback, who blamed Wyatt for a career-ending injury. Now he’s been traded from his dream team to the b-list Los Angeles Coyotes and is praying the scandal doesn’t get picked up by the press.

Tamera never believed her sister would steal her boyfriend, but it’s not all bad. Their secret affair led to Tamera’s public heartbreak, which has propelled her to reality TV star fame. Now she’s got a big-time Hollywood talent agent, famous quarterback best friend, and a determination to never again let a man derail her life.

When Tamera becomes Wyatt’s real estate agent, sparks fly—until they realize her best friend is also his nemesis. As things heat up in the press, vicious lies spread like wildfire and test their fragile bond. Can their hearts heal from past hurts and trust in a future together?”

Tamera is a character we met briefly in the first book of the series “Miss Match”. Unfortunately she didn’t leave a very good impression on us then. However, that seemed to be the fascinating theme Lindzee Armstrong wove through this story, things aren’t always what they seem.

I’m always impressed when an author uses a story to make us believe one thing about a character then is able to subtly pull you in the opposite direction turning a friend into a villian and a nemesis into a confidant. Lindzee did this really well making you feel one way about many of the characters, then just like a trick play in football, with sometimes only a single scene you see them in a whole new light.

A light hearted read, with a little bit of angst, but mostly just sweetness.