I confess though I am a Christian, I don’t love all Christian writing. Some of it feels too preachy, some of it feels like the religion is the plot, instead of the religion supporting and enhancing the plot. Melanie Dickerson does a good job of balancing the adventure, the romance and the faith in her Hagenheim series. The Orphan’s Wish comes out tomorrow and is book 8 in the series. 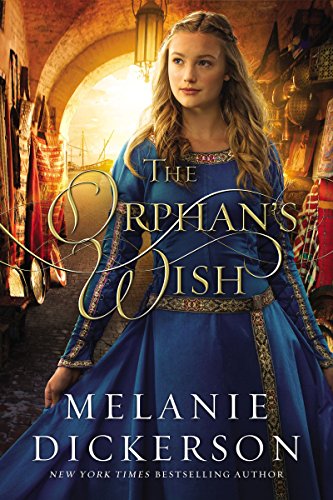 “Orphaned and alone, Aladdin travels from the streets of his Arab homeland to a strange, faraway place. Growing up in an orphanage, he meets young Lady Kirstyn, whose father is the powerful Duke of Hagenheim. Despite the difference in their stations, Aladdin quickly becomes Kirstyn’s favorite companion, and their childhood friendship grows into a bond that time and opposition cannot break.

If he ever wants to feel equal to his beautiful and generous friend Kirstyn, he must leave Hagenheim and seek his fortune. Yet once Aladdin departs, Lady Kirstyn becomes a pawn in a terrible plot. Now, Aladdin and Kirstyn must rely on their bond to save Kirstyn from unexpected danger.”

Most of Melanie Dickerson’s books are based on fairy tales. This one I felt though it had elements of the Aladdin story, was the one that most loosely followed the original. That said, it was a unique twist to the story with Christian themes that many young adults can connect with.

Kirstyn and Aladdin’s love story is a cute friendships to more development. I found that as they met when they were both quite young the writing style fit quite well, but as they grew I would have liked to see the writing voice grow a little bit more with them.

There was one plot point that seemed in-congruent with the rest of the character. The wealthy merchant Herr Kaufmann seems to have made his way in the world and established his wealth quite well before Aladdin, but then flounders without him. It seemed inconsistent with the character she introduced us to, for him to face financial difficulty without Aladdin. His illness addressed this somewhat, but not enough to explain financial ruin.

The undertones of feeling not good enough, broken or unloved, were woven into the story quite well. There are so many young adults that can connect with those feelings of inadequacy that it’s beautiful to see stories that are willing to address such emotional driven topics for youth, and do it well.