I used to feel like I was a relatively intelligent individual. Not that I had an above average IQ or anything extreme like that. I could however, carry on conversations with adults and feel like I was contributing to some degree without feeling like an idiot. These days most of my conversation are carried on between imaginary characters in an imaginary world my children create. Probably why I appreciate witty conversations carried on in the pages of a book, it’s the most adult conversation I get to experience all day. Rebecca Connolly‘s latest novel, The Merry Lives of Spinsters‘  has that in spades. 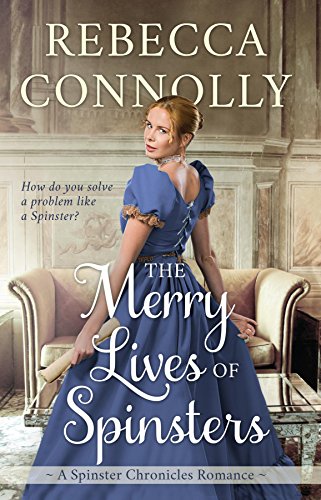 “Georgiana Allen is a spinster and everybody knows it. She also happens to be one of the writers for the Spinster Chronicles, and everybody knows that as well. She’s accepted her lot in life, and, along with the other spinsters in her circle, takes great pride in the articles she writes and the influence she has. Then Captain Anthony Sterling infiltrates their group, and her life, and Georgie impossibly begins to hope once more.

Tony Sterling had no idea what to expect when he agreed to break up the Spinsters for his cousin, but he certainly did not expect Georgie Allen. From the very first meeting, she upends everything he thought a spinster would be, and her beauty and wit keeps him on edge in thrilling ways. The more he gets to know the Spinsters, the less he wants to break them up. And the more he wants Georgie in his life. Permanently.”

Rebecca Connolly has a gift for writing true romance stories. They aren’t fairy tales, they don’t expect happily ever after, and yet they’re magical. Seeing real people who find love, and fight to hang on to it, like we all must do; that is why I love her stories. True Romance, real romance, beautifully written. There is a comment made in the book that is possibly the truest statement of marriage I’ve ever read, “Marriage is not a union of two perfect people who will never offend and upset each other. It is made up of two very imperfect people who have chosen to live their lives together.”

Georgie and Tony are not your average Regency heroes. In addition to their very witty and intelligent conversations, they are flawed, like we all are, like true heroes are. For heroes they are, both of them were defenders of the innocent. I loved that Georgie took a stand. She is evidence that speaking up is hard and the backlash can be huge, but taking a stand will always be worth the protection of the innocent.

There was a spot in the book where they argue and it blows out of proportion. I know a bit of tension and conflict makes for good story telling, but at first I thought their argument, should not have been that big. Georgie is an intelligent independent woman and she should have at least listened to reason. After all his intentions were never nefarious to begin with. I felt the conflict unnecessary. …

However, when I thought about the character that Rebecca had built, I realized how true to that character her reactions were. Even women who are intelligent and independent suffer from insecurities. I have seen women be brushed aside or belittled due to their station, their marital status, their education or lack their of, and they often pull a cloak of pride and indifference around themselves. When in reality they’re dying inside.

I loved that Rebecca gave Georgie insecurities, because we all have them. This story was a beautiful reminder that you really don’t know what battles the person beside you is facing, and all of us deserve to be respected and loved.