I can’t say that when I was a young adult that I ever had the desire to elope. However, it does make for a really interesting story. Three to be exact in this case. The Timeless Regency Collection’s newest release came out yesterday. Road to Gretna Green has stories from Lucinda Brant, Julie Daines, and Heather B. Moore. 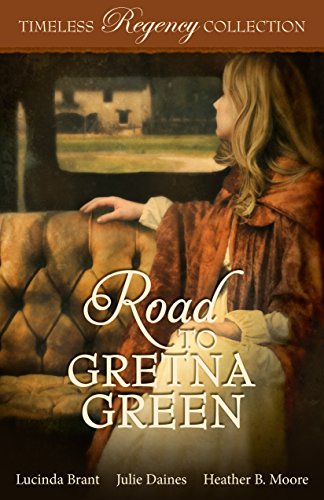 SAVING GRACE by Lucinda Brant
“When widow Helen, Lady Dysart, returns to the English border town of Carlisle for a family wedding, she decides to confront local physician Royston Meredith, the man who broke her heart. Royston has loved Helen since they were teenagers. He thought the feeling mutual until she up and married the local MP. While everyone around them hopes this reunion will see Helen and Royston sort out their differences, of more immediate concern is Royston’s youngest sister Grace, when she elopes with the steward’s son. Helen and Royston dash after her, determined to save her from scandal and an imprudent match. But in saving Grace the couple may very well be saving themselves.”

This was a cute second chance love story. Sometimes I have a hard time with these stories. I want to just shake the characters, seriously your pride is wounded enough not to check on things and talk it out? But, the feelings were sweet and the chemistry was well written.

FOOLS RUSH IN by Julie Daines
“Richard Arden needs a wife in order to collect his inheritance. Eliza Barnes needs to escape an arranged marriage to the odious Mr. Barrington. When Richard overhears Eliza’s plight at the coaching inn, he does the most reckless thing he’s ever done—he proposes to a woman he’s never met before. What begins as an easy solution leads Richard and Eliza on a journey across the country with Mr. Barrington at their heels, complicated even more when their fake engagement leads to feelings that are very real.”

This in the moment bargain that brings a developing love, was very well done. The spunky character were well developed, something you don’t get as much in a Novella. The intrigue and the twist with the inheritance was clever, and the ending was not only sweet, but fit so well with the characters and story she built.
A LADY OF SCANDAL by Heather B. Moore
“Unfortunately, Bridget’s marriage is over in four hours due to her husband’s tragic death. Fortunately, Bridget is now free from her distasteful marriage of convenience. When her year of mourning passes, and she meets her former husband’s cousin, Bridget discovers that her difficulties are far from over. Lord Hugh Wilde blames Bridget for his cousin’s death. But when Bridget’s sister elopes to Gretna Green with a man of questionable reputation, Lord Wilde is the only one who can help, and they both have to set aside their pride to rescue the errant sister. “

This story has a good balance of tension and misunderstandings that captures your interest through to the last page. The way she used the misunderstandings to pull the couples together made for a unique romance that left you smiling at how she wrapped it all up.