Is it slightly unfortunate that every book about magic from here to eternity will be judged against Harry Potter? Or is it just common nature to want to experience something that magical again and again and hope you will find it in the next story? When I first started The Paper Magician I felt that same magical excitement and was instantly pulled into the magical world that Charlie Holmberg creates. As an added bonus her main character, was a girl!

However Ceony didn’t turn out to be the heroine I was hoping for and though I enjoyed the first book I found myself disappointed and occasionally cringing at her lack of growth and maturity through the next two books. It was with some trepidation and a little hope that I picked up The Plastic Magician, and I was pleasantly rewarded. 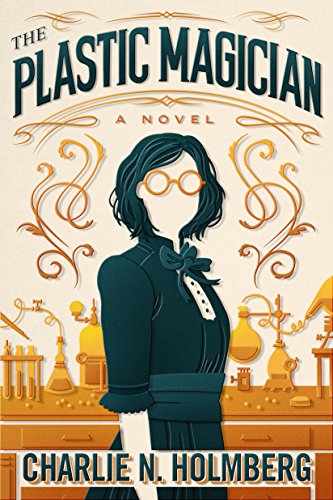 “Alvie Brechenmacher has arrived in London to begin her training in Polymaking—the magical discipline of bespelling plastic. Polymaking is the newest form of magic, and in a field where there is so much left to learn, every Polymaker dreams of making the next big discovery.

Luckily for her, she’s studying under the world-renowned magician Marion Praff, who is just as dedicated as Alvie is, and together they create a device that could forever change Polymaking—and the world. But when a rival learns of their plans, he conspires to steal their invention and take the credit for it himself.

To thwart him, Alvie will need to think one step ahead. For in the high-stakes world of magical discovery, not everyone plays fair.”

Alvie is the heroine we were all hoping Ceony would be. She has her insecurities and vulnerabilities that make her a great a character to connect to, but she’s also tenacious and bold. Her quirky personality is what set this story apart and made it work.

The world of polymaking and inventing come alive under Alvie’s contagious enthusiasm and Charlie’s writing.

The intrigue and love story help move the plot and enhance the magic of this world instead of detracting from it. You’re invested not only in the character’s but their achievements and discoveries.

I’m excited to see what’s next for this world of magical discovery and candidly hope it only gets better from here. –N.C.