Confession: I’ve always secretly wished I could be a part of a regency house party. They sound entertaining and dramatic and just the sort of craziness I would love. Sarah Eden’s latest novel, Loving Lieutenant Lancaster, takes place at such a setting. But it gets better, what could be better than a regency house party you ask? A regency house party in which both the Jonquils and the Lancasters have been invited, genius! Oh to be a imagined fly on that fictional wall! 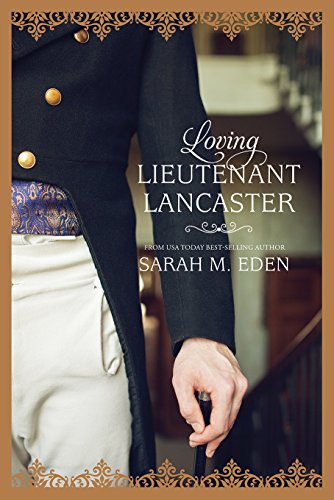 “Orphaned as a child, Arabella Hampton was the unwanted and unloved charge of a cruel aunt and neglectful uncle. The only light in her young life was the kindness of the Jonquil family, and she clung to the childish dream of someday living with them at Lampton Park. Now, years later, that opportunity is presented to Arabella in a most unexpected way: she is to be the lady’s companion to the dowager countess. The lines of her position are blurred, and she is neither family nor servant. So when the countess plans a grand house party, Arabella is content to hide in the shadows. But one gentleman sees her there.

Lieutenant Linus Lancaster has retired from the navy and is not looking for love, especially when he finds himself entangled in his sisters’ scheme to trap him into finding a wife at a house party at Lampton Park. Yet amid the festivities, he’s impossibly drawn to the dowager’s quiet companion, Arabella.”

As excited as I was to dive into a book where the Jonquils and the Lancasters collide, I could not anticipate the awesomeness that would ensue when you but Philip Lancaster and Adam Boyce in the same location, for an extended period of time. I have this image of Sarah Eden sitting at her computer drumming her fingers together with a conniving, but smug look on her face, at the prospect of writing such scenes. They did not disappoint, they were fantastic and quite hilarious.

The beautiful thing about Sarah Eden, is the seamless way she combines both the humor and the deeper beautiful messages of love, and trust, and family.  Of acceptance and fear, and a need to belong. Each emotion is potent and makes the words on the page become more than just a story, but a connection.

Sarah has taken us on a journey with these two families for so long, it was nothing but delightful to get to see them collide and can I just say, I am so incredibly excited to hear Charlie’s and Artemis’ respective stories, or story?? You can see how much they are both hurting, and yet wanting. Now that would be the best, right? A permanent joining of the two families. A girl can dream. –N.C.

PS- The one thing I was confused on, some one help me out here…did I miss something? Dr. Scoresby just shows up at Linus’ house, like that was normal and acceptable? Yet they were all out of beds and Linus is sleeping in the office. Where did he sleep and why was it generally acceptable for him, who was no relation and not invited, to just be there?? Help a confused girl out here…

2 thoughts on “Fly on the Wall”