When I heard about the book The Best Laid Flight Plans, by Leigh Dreyer, I was super excited for a few reasons: 1. I love re-tellings,  but that’s nothing new 2.  It was put into the military life I have come to love and enjoy. 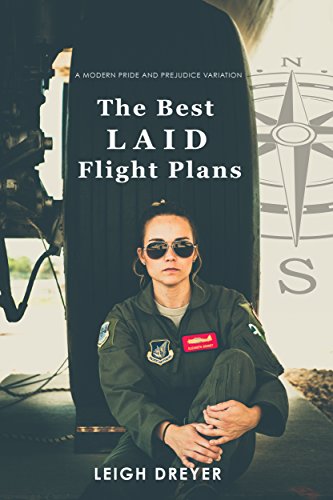 “In this modern Pride and Prejudice variation, Captain William “Fitz” Darcy has just received a new assignment as an instructor pilot at Meryton Air Force Base. Soon he meets the intrepid 2nd Lieutenant Elizabeth Bennet, a new student at the base that he cannot keep out of his head. Elizabeth, on the other hand, finds Captain Darcy to be arrogant and prideful and attempts to avoid him at every turn. Despite Darcy’s insulting manners, Elizabeth soars her way through pilot training, but can she soar her way into love as well?”

I was excited to read one of my favorite regency stories, Pride and Prejudice, with an Air Force pilot twist! And while Leigh Dreyer did a good job with doing just that, I did not love it as much as I had hoped. The end was probably my favorite part, the author took a bit of liberty with the story that really threw some suspense into a story I already knew so well.

I did struggle with a couple things. I found it a bit distracting that she kept the names exactly the same, such old fashioned names were hard to put into my modern thought of the story and along those same lines some of the language was not consistent. There were modern words, even some cussing and then all of the sudden an Air Force pilot is using a sentence with words like “absolutely delightful” and “it is lovely”. I can’t picture a normal ’30 something saying’ that, let alone an Air Force pilot.

My one other confusion came when the author took the officers to the military ball. At the ball, there was a toast given.  It’s one I’ve never heard at the military balls I’ve attended. Though beautiful, the toast spoke only to pilots, which is not all the Air Force is made up of, and seemed out of place. I attempted to reach out to the author to get better understanding, but did not receive a response. So while there may be an explanation for it. To me it was confusing.

I did enjoy that I was able to understand the military lingo and acronyms and though she did have footnotes could see that being daunting for other readers. I enjoyed the story enough that I am going to read the next book that will be coming out despite some of my hiccups with this one. –AB