Confession: I’ve always wanted to ride a train, and I’m not talking one of those modern day smelly transit trains. I’m talking a smokestack, caboose, kind of train with a dining car and a lounge car and your very own sleeping compartment. I guess the next best thing would be reading about them.

The Timeless Romance Anthologies just released another set of stories in their Victorian Collection. The Orient Express contains three stories from Elizabeth Johns, Annette Lyon and Nancy Campbell Allen about the intrigue and opulence of the long-distance passenger train that ran from Paris to Constantinople with various stops in between. 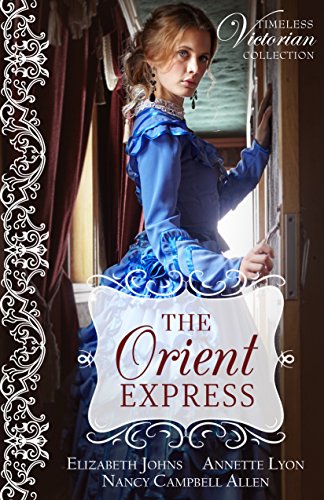 TO BREAK A BETROTHAL by Elizabeth Johns:
Recently orphaned heiress Kate Worthington must travel to England from her home in India to break an outdated betrothal contract.  A gentleman befriends her whilst she is aboard the luxurious Orient Express, and the attraction she feels firms her resolve to break the betrothal. What she does not count on is Lord Darlington’s hidden depths.

DETECTIVE GRACE MEETS HER MATCH by Annette Lyon:
Even private investigator Grace Thomas needs a vacation, yet she can’t exactly turn off her detective skills at a whim.  She prides herself in being one step ahead of any flirtatious gentlemen, and fellow passenger Marshall Bailey is no exception. When Grace discovers that Marshall is traveling under another name, she learns that her first impressions aren’t always correct, and that she’s mistakenly allowed him to play havoc on her heart.

MARRIED ON THE ORIENT EXPRESS by Nancy Campbell Allen:
Detective Vincent Brady must recover a priceless statue before it falls into the wrong hands. The only problem is that the American woman who’s carrying it for her brother has no idea the value.  Vincent soon discovers that out of all the hardships he’s overcome in his lifetime to rise to his current detective status, convincing Emily to take a chance on him is even harder.

All three stories are lighthearted mysteries with a little romance thrown in. Novellas can always seem a little hurried in the relationship department but somehow all three authors not only make it work, but make it compellingly believable. All three stories contain characters that are complex without being heavy, character’s in whose time I spent with was delightful, and as such, just a little too short.

I did feel like the middle story, “Detective Grace Meets Her Match”, had a fascinating plot, but too much of it was contained to their thoughts. Though in certain circumstance this is not necessarily a bad thing, with all the stories being a little more espionage and action oriented the 60% thought process and 40% action made it drag just a little bit for me.

Overall I really enjoyed all three stories and would definitely recommend them for anyone looking for a quirky combination of action, mystery and romance. Or, for people who like me, live vicariously through their reading and hope to someday ride a train as cool as The Orient Express has been portrayed. –N.C.