So we’re trying something new today. I confess I’m not sure how it’ll go, but we’re trying it anyway. One of the unique things about our blog is that you get book recommendations from three different points of view. If you’ve noticed the initials at the end of each of our blog posts, those indicate which one of us wrote that particular review. Even though we’re sisters, we’re all three very different. Sometimes however we read and love the same thing! So today we’re giving you what two of us thought about Nichole Van‘s Lightning Struck in the form of a kind of conversation we had then typed here for your enjoyment. Maybe if we become techies we’ll do a video in the future. 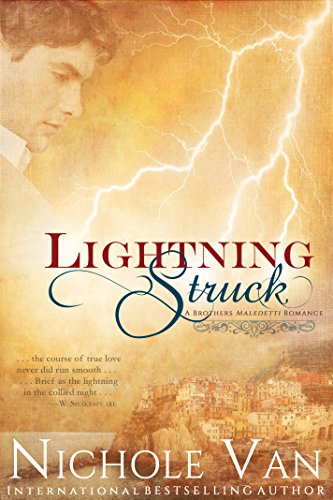 “Chiara doesn’t like Jack. Jack doesn’t like Chiara. The story should end there.
Except . . . maybe Chiara finds herself daydreaming far too often about Jack. And maybe Jack finds Chiara aggravating in an adorable sorta way. Maybe Jack and Chiara find themselves falling in love. The problem, of course, remains.  Jack is a ghost.
And Chiara is not.

But tackling the problem of Jack’s ghostliness is not straightforward. Soon, Jack and Chiara find themselves embroiled in a mystery which creates more questions about the D’Angelo brothers’ gifts of Second Sight.”

NC – This book was phenomenal, to start with, let’s talk about her amazing ability to convey the feelings of a ghost. I confess I’ve never been a ghost, and don’t know if I could channel that kind of understanding. His yearnings for human contact, his sense of purposelessness, and endless.

MV- That reminds me of one of the quotes you highlighted, “…our eyes couldn’t keep silent.” Even with two characters who couldn’t touch she was able to create chemistry.

NC- I loved how she gave the two main characters empathy in their loss. Him with, well everything, and her with her father. Chiara says, “Loss could describe me, but loss didn’t have to define me.”

MV- It will change you, make you better or worse. It can make you a lot of things, but it doesn’t have to define your life.

NC- All these examples are proof that Nichole Van does a really good job of connecting a reader to a character’s emotions. And yet it’s not just that.

NC- And you’re invested in the story not just emotionally but intellectually as well. The best writers involve more than one faculty, pulling on all your senses.

MV- Not in the way where it’s too hard, or too deep.

NC- It doesn’t make you work to the point of making your head hurt. Like pulling in the lightning. The symbolism was beautiful. The way she used it throughout the book and then flipped it on you at the end was masterfully done.

MV- Like the dreams, I kept wondering where she was going with it, and then she used them to pull Chiara even more into the story and the “curse” and her father, I loved it.

NC- Also how she used the crazy ancestor, whose name I’ll have to go look up, but starting with him, was a great foreshadowing. The chapter anchored you in to needing to know what happens next. But it was also a great subliminal message, whether she meant it or not. It’s often the over looked, or the dismissed “crazies” that hold the greatest answers.

MV- Her writing is always full of little gems of wisdom. Entertainment in the best form, engaging, touching, and uplifting.

NC- She ended with one. “We would live happily ever after, Chiara and I. Why did I know that? Because we were both committed to becoming our best, most-whole selves.” That’s what love is about. Twenty-Five years down the road chemistry and passion will not be what has held you together, but being committed to being your best self, will be.

MV – Not being the best you your partner wants, but your best self.

NC- It was brilliant of Nichole to start with the tension and friction of the characters in the beginning. Showing how much they annoyed each other, than used those things to draw the characters together and help them see that’s exactly what they each needed and then to end with that thought, was a beautiful narrative arc.

MV- So Five stars from me

NC- and me, definitely a must read. Can’t wait for Tennyson’s story!

1 thought on “I’ve just had an apostrophe”