Confession: I love Jane Austen. Not really a true confession for a romantic. The confession comes when I tell you that “Pride and Prejudice” is not my favorite. As far as writing goes, it is genius. The character development the story arc the detailed understanding of familial and romantic relationships. But, as far as my personal favorite goes that would have to go to “Sense and Sensibility.” If you haven’t seen the 2008 BBC version with Hattie Moran, Charity Wakefield and Dan Stevens, you really should!

In Julie Wright’s latest book Lies Jane Austen Told Me, her character Emma (yes that’s her name- I liked the intended pun, it totally worked for her.) She commented on Austen‘s writing saying, “she understands the subtleties of humor and people and how they work together to make reading an enjoyable experience.” I thought It was a beautiful description of great writing. And one Julie Wright herself is able to pull off quite well. 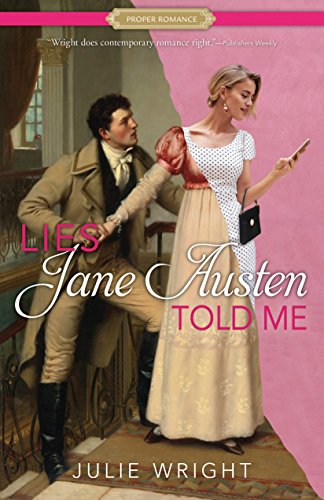 “Ever since Emma read Pride and Prejudice, she’s been in love with Mr. Darcy and has regarded Jane Austen as the expert on all things romantic. So naturally when Emma falls for Blake Hampton and he invites her home, she is positive an engagement is in her future. After all, Blake is a single man in possession of a good fortune, and thus must be in want of a wife.

But when it turns out that what Blake actually wants is more of a hook-up than a honeymoon, Emma is hurt, betrayed, and furious. She throws herself deeper into her work, which is why she bristles when her boss brings in a consultant. Her frustration turns to shock when that consultant turns out to be Blake’s younger brother, Lucas.

Emma is determined not to fall for Lucas, but as she gets to know him, she realizes that Lucas is nothing like his brother. What she can’t understand is why Lucas continues to try to push her back into Blake’s arms when he so clearly has fallen as hard for her as she has fallen for him.”

Julie gives her characters depth, and darkness to deal with. However, she also gives them light and hope. And through their story we are given the same. We are shown that darkness and struggles can define us and sculpt us, but they don’t have to limit us. “Shown” being the optimal word because Julie uses beautiful imagery to to express the character’s fears and hopes. Case in point: “I had to force them back so no one would see my eyes leaking out the flood of my heart.”

Not only did this book speak to my love of all things Austen, it was also a beautiful reminder of hope and light, and love. For “If Jane teaches us anything, it’s that we have the right to choose our own loves in life.” – Lies That Jane Austen Told Me. –N.C.