I must be wishing I was still at Disneyland. This weekend I read a Cinderella story. There are so many retellings of the Cinderella story that sometimes it can be too much. I however, really liked the way Victorine E. Lieske did her retelling in Isabella and the Slipper. The setting is high school so it is for a younger audience than most of her books. 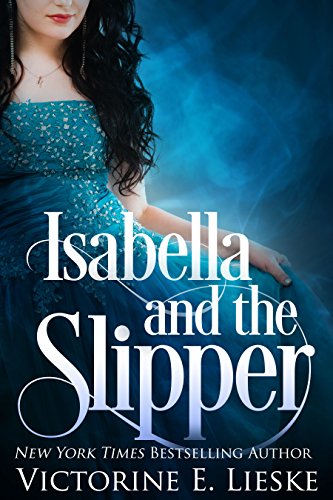 When Isabella accidentally switches phones with Chase Hawkins, the hottest guy in school, she finds herself making an unexpected connection with her secret crush. There’s only one problem: her awful stepmother and two horrible stepsisters would freak out if they knew. Plus, she’s sure Chase will run if he finds out he’s been texting the school nobody. But things get interesting when he gets paired up with her in physics class. Will it blow her cover?

One of the heartbreaking things to me about every Cinderella story is the fact that she has lost both parents and has no blood siblings. As if that wasn’t enough the step family she is supposed to have doesn’t love her. I couldn’t imagine that. I have a big family and I would do anything for them. It breaks my heart that Cinderella has family, but they turn her away. This is heartbreakingly obvious in this version when Chase tells Isabella, “So you’re in a house full of people who constantly tell you you’re worthless.”

The redeeming thing is Cinderella’s attitude toward life. She doesn’t give up and she remains kind. And even though she doesn’t have family that will love her she is loved by those she serves with. Victorine Lieske does the same thing in her modern day version of Cinderella. Isabella is loved by those she works with in her Father’s Gallery and by a friend of her fathers.

The first part of the story is based on lies.

“She shook her head, wondering how much she could lie before getting thrust down to hell.”

I get super annoyed with books that revolve around a lie. Which it seems there are a lot of. I guess If the main characters in the book told the truth from the start the author would have no story. Sometimes I get so frustrated with the characters and their reasons for lying that it makes me walk away from the book. This one almost did. But I was in a car driving home from being with family for the holidays so I stuck with it; I’m glad I did.  In some stories when the truth comes out there is a big blow up and tons of drama. Victorine didn’t do that with her story. The way the truth came out is very well done. It would have ruined the book for me if it was more drama filled than it needed to be. I’m also a sucker for dreams coming true and love books that teach you to dream big. I’m going to go back to pretending I’m still in Disneyland, maybe my dream will magically come true.–M.V.

1 thought on “A Dream is a Wish You Heart Makes”