Confession, I want to live happily ever after. I know it sounds corny and maybe a little sad for a thirty something mom of three to still believe in happily ever after, but I do.
My latest read was a happily ever after fairy tale by K.M. Shea.  She recently released book 9 of her Timeless Fairy Tales series entitled The Frog Prince. These books are a fun twist to well know fairy tales written for young adults. I would go as far as to say closer to tweens. 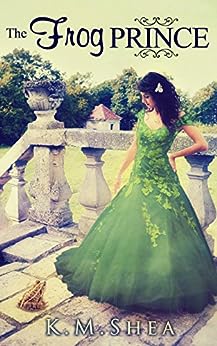 “Crown Prince Lucien has spent his life pretending to be a flirtatious idiot in order to manipulate his courts and hide his deficiencies. His acting backfires, however, when his father orders an enchantress to turn him into a frog for his own safety after he narrowly escapes an assassination plot.

Servant. Capable. Expendable. Strong-willed Ariane is all of these things, which makes her the perfect escort for the newly transformed Frog-Prince Lucien. Carting the lazy prince around on a velvet cushion is the last thing Ariane wants to do when it seems like the dark magic that has been plaguing her world for years is winning. But when a pair of rogue mages attack Prince Lucien, Ariane realizes the threat of darkness is much closer than she thought. Even worse, she finds herself drawn to the prince and noticing that perhaps he is not as foolish as he acts.”

I found it really interesting that she moved away from the classic story quite a bit by making her heroine a maid instead of a princess. It seems like such a huge plot change. She talks about some of her changes a little bit on her blog here:  http://kmshea.com/2017/11/07/frog-prince-original/. But doesn’t really address the maid vs princess idea.

Technically the book can be read as a stand-alone book, but I wouldn’t recommend it. This one more than the others has crossover characters from her other Timeless Fairy Tales books. I like a glimpse into characters I’ve already come to know. It was fun to get back into her fairy tale world, and I’m anxious to eventually read Angelique’s story. I must admit however that I was way past the point of curious about the darkness in the land and grateful she finally defined it.

Possibly the best parts of this book was how she tied in her Snow Queen story. I would definitely recommend reading those first to understand the great way she pulls in their kingdom’s history. I’m a firm believer in learning from our past and loved that she helped her characters realize that. It’s a fun universe she’s created and one I would definitely recommend to my niece who is currently in that tween stage of life.