Confession, I have a few movies that I can watch over and over. My husband doesn’t understand this, he hates to re-watch movies; once is enough for him. When we first got married and he would come home to see me watching “Sweet Home Alabama”, he would say “Again? Didn’t you just watch this last week?” I would kindly tell him it had been at least six months. 11 years later he still doesn’t like to waste time watching something he has already seen, and I am still re-watching “Sweet Home Alabama” at least once a year. I am the same with books, I can re-read them over and over. 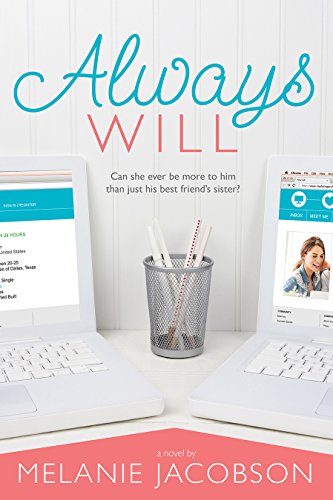 Melanie Jacobson’s Always Will is one of those books.

“Handsome twenty-eight-year-old Will Hallerman has finally had enough of the dating world—he’s ready to find a wife and settle down. This announcement is catastrophic in Hannah Becker’s world. To Will, she will never be more than his best friend’s little sister. Determined to open his eyes to her charms, Hannah sets out to sabotage Will’s wife hunt.  Despite her crazy schemes, nothing seems to be working. Hannah can’t help but wonder if it’s time to set aside this childhood crush—to move on and settle down herself. She’s ready for a fresh start with a great guy. If only Will weren’t suddenly changing the rules of the game . . . And how can Hannah move on when Will just won’t let her forget?”

I love the banter that goes back and forth between Hannah and Will. She is sassy and smart which I really like in a main character. It makes her a good match for Will, who is a Rocket Scientist. Need I say more? But where he’s very analytical, she’s more emotional. There are times where I want to shake both of them. But it’s a fun predictable book with just the right humor and emotion in it.

Melanie has quite a few other books I enjoy as well. She likes to use a similar formula in most of her books and usually uses an online dating theme. Which is why I enjoy her books spaced apart. You can currently get The Fortune Cafe: A Tangerine Street Romance Kindle edition for free on Amazon. –M.V.